What do you really need right now?

The context for these videos

This is the eleventh in a short series of videos in which I am picking stories from my own life to share with you – and using them to illustrate how I have achieved a life in which I feel I have become enormously rich terms of emotional wealth & well-being. And the reason I’m doing this is to show you how you too can live a life free from anxiety and stress.

Please let me know what you think by commenting below!

The previous video in this series: Sinking my narrowboat

The next video in this series: Do you really expect me to believe that?

Hello again. What do you really need right now?

Today I’d like to share with you another big decision that I made after I got divorced. This is the 11th video in a short series in which I’m picking events from my own life that illustrate how I’ve reached a position now where I feel quite wealthy in terms of emotional and mental health. In each of these videos, I’m using one of the Anxiety Freedom Cards to illustrate my message. And the reason I’m doing this is so that you, too, can live a life free from anxiety and stress.

Now, in the previous video, I shared how Bindi helped me to solve a problem that stood in the way of me selling my narrow boat. In this video, I’m going to share how we went through the decision to actually live together.

Now we’re going back about 17 years. Bindi and I have been meeting once or twice a month for the previous two years since we met on holiday in Spain at the end of 1999. And we’ve become really close friends, but we’re living in different cities. Bindi has moved from Yorkshire to Bristol and I’m living on a narrow boat on a backwater of the river Thames in the city of Oxford. And we both have two teenage children and ex-partners who feel that they’ve pretty much finished their job of parenting. Bindi’s daughter was the oldest, is the oldest. Our boys are the same age, and my daughter is the youngest, and we both felt that our children needed more input, more parenting from us.

Now, something that happened that I really wasn’t expecting is that at some point Bindi invited me to move to Bristol to live with her. This was a big deal for me. It was very exciting because it showed me that she really had faith in me. She believed in me, and I think sometimes it’s really important that we have someone who believes in us more than we believe in ourselves. And at first I say I was very excited at the prospect of moving to Bristol. I’d been a student in Bristol and I had many connections with Bristol, but I’ve never lived there after my student days. But after much thought, I realised I needed to stay close to my two children who were at that time aged 13 and 16. So it wasn’t really practical for me to move to Bristol.

Anyway, after much thought and much discussion, we decided to put our skills, our ability and our resources together to buy a house in Oxford so that we could live together. And on paper it was quite a mad decision, really, because we’d never lived together. But we haven’t even lived in the same town. We both had full time jobs. Bindi had a background as a nurse, and she’d been married to a GP before, and was now working as a health visitor in the NHS. And I was working as a freelance engineer. And what we both have in common is that we could both recognise not only our own abilities, but we also saw in each other skills, knowledge and experience that we didn’t personally have. So we have this intuition that together we could be a formidable team because what I was good at wasn’t the same as what Bindi was good at, and vice versa.

So I remember an exercise that we did one day. A light hearted exercise, and we sat down and we decided to write down the rules of our relationship, and our number one rule was: “We will communicate”. Now, if you watched my earlier video, I think it was the one called “What I learned from getting divorced”, you’ll know that there was a breakdown in communication that came to be the end of my first marriage. So communication was something that mattered a lot to me. And to meet someone who also cared enough to make it their number one rule was, it was a big step. I think our second rule was: “We will surf every wave, not just the big ones.” And that was a little bit of a metaphor for how we like to live our lives. And I think rule number three was that “We won’t be bound by rules.” So it was a bit tongue in cheek. It was light hearted, but it was a really good exercise, and one I would recommend if you’re ever in a relationship and you want to kind of, be very transparent about what works in that relationship. And I think we also both felt that a relationship is something that you invest effort in, that you build it, you strengthen it, you grow it. You don’t just take it for granted, as in “Oh, well, you know, we’re in love – that’s it.”

We didn’t have the language for this back then, but we both had an intuition that we could help each other to be the best version of ourselves. Now with a background in nursing, Bindi was very used to looking to the needs of patients and clients, and we were active in helping each other get each other’s needs met in balance. And this is, now we have the language for it since we retrained, and became psychotherapists. And it’s known as “Mutual Needs Satisfaction”.

Basically, it’s just the idea that relationships work best, not so much when you have shared activities, although that can be an important factor. But more to do with the idea that actually it’s about helping each other to get your needs met in balance.

So as I say, we pooled our finances and we put everything we had into creating a home for our four children. I also think one of the things that we were lucky to share was that we were both skilled in recognising our own emotions, and being able to stay calm in the face of adversity. And this is a skill that we both had, probably because of earlier life experiences and also our natural aptitudes. So, as I said later, we re-trained as psychotherapists, and now our favorite question is: “What do you need right now?”

Now the card I’m going to use to illustrate this is card number 25. It’s the “Circle of cards.” And in this image, all of the anxiety freedom cards are laid out in a circular pattern. And the idea is simply that in the middle of the circle, you have the orange cards. And these are the cards that relate to you. These your innate skills, your innate capabilities, the superpowers. I’ve talked about them in the past. Things like imagination, rational thinking, ability to connect with other people via rapport, our dreaming brain. And, these are the things you’re born with. They’re innate.

The blue cards arranged around the outside are those things that we need to get from our environment in order to thrive. So these are things like: attention, food and drink, sleep, movement, emotional connection, a sense of being appreciated, being connected to other people via community, privacy, a sense of achievement, a sense of security – I may have already said that – can’t remember.  But basically those needs that, when we get them met in balance, we’re kind of, we’re able to thrive. We like the plant that’s getting the right amount of light, the right amount of water, the right environment in which it can really thrive and be itself, its best self.

Now there’s a passage in a book that I love by Khalil Gibran. It’s the book is called The Prophet. You may know it, and it’s the passage about marriage, and I think it’s relevant here, and I’d like to read it out. So if you’ll indulge me, it’s a page and and half and it goes like this: 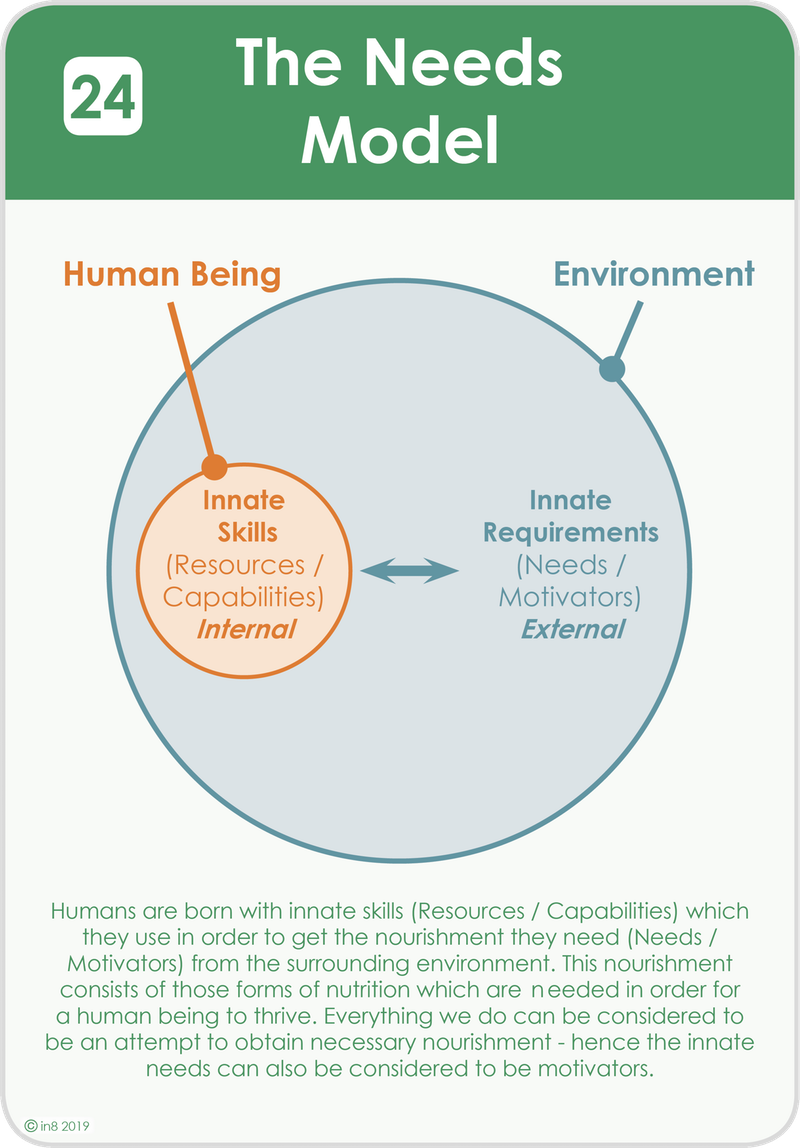 “Then Almitra spoke again and said, “And what of marriage Master?” And he answered, saying, You were born together and together you shall be forever more. You shall be together when the white wings of death scatter your days. Aye, you shall be together, even in the silent memory of God. But let there be spaces in your togetherness. And let the winds of the heavens dance between you. Love one another, but make not a bond of love. Let it rather be a moving sea between the shores of your souls. Fill each other’s cup the drink not from one cup. Give one another of your bread, but eat not from the same loaf. Sing and dance together and be joyous, but let each one of you be alone. Even as the strings of the lute are alone, though they quiver with the same music. Give your hearts, but not into each other’s keeping. For only the hand of life can contain your hearts. And stand together, yet not too near together for the pillars of the temple stand apart. And the oak tree and the cypress grow not in each other’s shadow.

And I think that’s just a lovely passage that explains why we have to be strong in ourselves. We have to be our own pillar, and we need to stand as pillars to support a relationship, but not too close apart. No, not too close together. There needs to be space between, and I think the idea of Mutual Needs Satisfaction reflects that really well.

So in summary, what I’m really saying here is that relationships work best, not so much when you have shared activities, but when you help the other person to get their needs met in balance.

If this makes sense to you, if you find it in any way helpful, please
could I ask you to share it, like it, or, best of all, scroll down and comment on it below. My work involves talking to people who are struggling. And I’ve helped many people in the past by talking about these things. If you interact with this video, it will help me reach more people. And that will mean I can help more people. So please scroll down and leave a comment.

And I’ll leave you with that question that I began with. Which is: “What do you need right now?”

And whatever else you’re doing, please don’t forget to keep breathing.

The previous video in this series: Sinking my narrowboat

The next video in this series: Do you really expect me to believe that?

Any cookies that may not be particularly necessary for the website to function and is used specifically to collect user personal data via analytics, ads, other embedded contents are termed as non-necessary cookies. It is mandatory to procure user consent prior to running these cookies on your website.